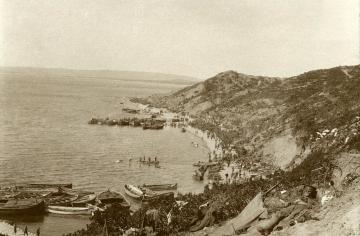 Gaba Tepe was a headland a little south of Anzac Cove, the site of the initial landing by the main Anzac troops. Early August saw the beginning of the "August Offensive", the second, and last, main offensive undertaken by the Allied troops on Gallipoli. The August Offensive began on the evening of the 6th. At Anzac Cove there were now around 37,000 troops. The Anzacs were given the main attack towards Chunuk Bair - a name still well remembered in New Zealand.

Over the five days of this first offensive, New Zealand lost about 880 men. A very large number of these (313) were from the Wellington Infantry. More than a third of the Allied force at Anzac were wounded or killed.

On the 21st, with a request for fresh reinforcements denied, the Allied commander ordered two simultaneous attacks, one by the British against Scimitar Hill, and one against Hill 60 by a mixed force of Anzacs, Gurkhas, Connaught Rangers, and others.

The New Zealand forces (the Otago infantry and the Canterbury Mounted Rifles), charging over some 600 yards, suffered over 60% casualties in just 15 minutes. They managed to reach and hold the first Turkish trench, but could go no further. (At that, they were more fortunate than the Australians, to the right of them, who were cut to ribbons). On that first day, the New Zealanders lost 61 men from a total of 285. In Jack's regiment, there were 103 casualties, of 165 men.

The British attack on Scimitar Hill was even more of a failure.

The August Offensive was the last such large-scale attack. After this, the sides settled down to trench warfare. This more settled operation saw the New Zealand & Australian Division HQ shift to a location north of of No. 2 Outpost at the mouth of Chailak Deere. Tent hospitals were build, and a YMCA canteen.