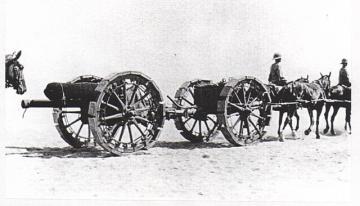 Taking the guns to Suez Canal

MONDAY – 1/3/15 – On guard all day. 3 brigades of Australians are reported to have left for somewhere yesterday. I expect we will soon be gone now. Gloves and new boots issued to-day.

TUESDAY – 2/3/15 – Battery training this morning. N.C.O’s instructed in use of director. Harness cleaning and gun drill this afternoon. Tomorrow we parade at 7.15 a.m. in full marching order for divisional training.

WEDNESDAY – 3/3/15 – Divisional training to-day. Paraded at 7.15 this morning in full marching order and moved out to a position about 10 miles off. Arrived back in Camp at 6 p.m. On the way back, as we were trotting along the road near Heliopolis, Sergt. Kelly’s horse stumbled and threw him in front of the gun team, with the result that the whole team and the gun passed over him, the off wheel of the gun passing across his stomach. He was taken to the Australian Hospital.

THURSDAY – 4/3/15 – Exercising horses this morning. This afternoon drivers horses and harness, gunners, gun drill while the Bt. Section N.C.O’s had instruction in the director, Mark I and Mark III

FRIDAY – 5/3/15 – Section training this morning. Straightening up this afternoon. Tonight we are leaving camp at 9.45 p.m. in full marching order with the rest of the division to take up a position.

SUNDAY – 7/3/15 – Church parade this morning. On watering order this afternoon.

TUESDAY – 9/3/15 – Left camp at 7.15 a.m. in full marching order for a field day with the Australians. We had to retire, and although we carried the retirement out very well we were annihilated in the finish. I hope we never get into as tough a position when we actually see fighting.

WEDNESDAY – 10/3/15 – Kit inspection in morning. All articles which could not be packed in kits were confiscated. This afternoon field dressings were issued.

THURSDAY – 11/3/15 – Brigade paraded this morning for purpose of having a photo taken. Unfortunately a sand storm started just as we lined up and although the photos were taken during a lull, a fair amount of sand still hung in the air and I am afraid it will rather spoil the photo. This afternoon all men were given two hours off to mend clothes.

FRIDAY – 12/3/15 – Cooperated with Australian Light Horse in an attack on oilfields defended by English territorials.

SUNDAY – 14/3/15 – Church parade in morning. On watering order this afternoon. Unexpected N.Z. mail arrived and was distributed this evening causing a good deal of joy in the lines. Reveille at 4 a.m. tomorrow for big field day.

MONDAY – 15/3/15 – Reveille at 4 a.m. Full turn out at 5.45. Took part in manoeuvres out at Virgin’s Breast, arriving back in camp at 12.30. Stables gun drill &c this afternoon. Rained for a short time this afternoon, this being the first real rain we have had since our arrival in Egypt.

TUESDAY – 16/3/15 – Section training both morning and afternoon. During the afternoon I acted as B.C. for one series, bringing the battery into a covered position with the director in rear.

WEDNESDAY – 17/3/15 – Section training. I had some hard riding in riding school this morning. We did our exercise at an old sand quarry, riding up and down the steep sides. This afternoon the camp was inspected by Sir Henry McMahon, the English High Commissioner.

FRIDAY – 19/3/15 – Took my gun out to military funeral this morning at 8 o’clock, arriving back at Camp at 1.30 p.m. Cleaning harness and gun drill this afternoon.

SATURDAY – 20/3/15 – General clean up in morning. Half holiday this afternoon but I did not leave Camp.

MONDAY – 22/3/15 – Inspection by Sir Henry McMahon, High Commissioner, of the whole N.Z. and A. Div. The mounted units marched past the saluting base twice, the second time at the trot.

TUESDAY – 23/3/15 – Nos. 1 went out with Major and Battery staff for tactical manoeuvres with the infantry. What a change from last March 23rd and indeed from all previous March 23rds to this. In the afternoon gunners retouching the guns with the splash painting and drivers stables.

WEDNESDAY – 24/3/15 – Battery paraded this morning in drill order for Brigade photo, and afterwards had a photo taken of the battery.

THURSDAY – Paraded in full marching order with two day's feed for horses, for inspection by the Major. In the afternoon we struck all the tents and had a general clear up, afterwards pitching the tents again.

SATURDAY – 27/3/15 – Usual inspection. First of the 3rd reinforcements arrived to-day. Stayed in Camp this afternoon as I had no money with which to take advantage of the holiday.

MONDAY – 29/3/15 – Orderly Sergeant for this week. Inspection of whole N.Z. and A. Div. by General Sir Ian Hamilton, Commander of the Mediterranean Exped. Force.

TUESDAY – 30/3/15 – Brigade training scheme carried out in vicinity of Virgin's Breast. Half holiday for football match given this afternoon.

WEDNESDAY – 31/3/15 – Battery training in morning. This afternoon it was so hot that we found it almost impossible to work outside. We were therefore given time off to have a shower.