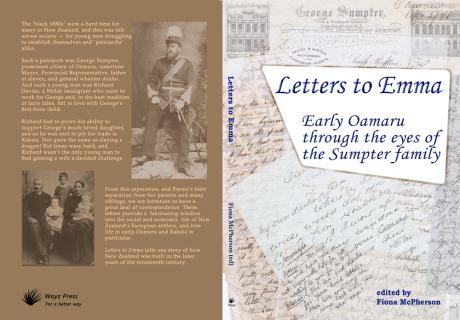 Letters to Emma tells one story of how New Zealand was built in the later years of the nineteenth century. This is a personal history, told through the correspondence of the Sumpters, a leading Oamaru family.

The book is also available in digital formats.

A personal history of early New Zealand, through the correspondence of a leading Oamaru family.

The ‘black 1880s’ were a hard time for many in New Zealand, and this was felt across society — for young men struggling to establish themselves and ‘patriarchs’ alike.

Such a patriarch was George Sumpter, prominent citizen of Oamaru, sometime Mayor, Provincial Representative, father of eleven, and general wheeler-dealer. And such a young man was Richard Davies, a Welsh immigrant who came to work for George and, in the best tradition of fairy tales, fell in love with George’s first-born child.

Richard had to prove his ability to support George’s much-loved daughter, and so he was sent to ply his trade in Rakaia. Not quite the same as slaying a dragon! But times were hard, and Richard wasn’t the only young man to find gaining a wife a decided challenge.

From this separation, and Emma’s later separation from her parents and many siblings, we are fortunate to have a great deal of correspondence that has been kept in the family. These letters provide a fascinating window into the social and economic life of New Zealand’s European settlers, and into life in early Oamaru and Rakaia in particular.

Letters to Emma tells one story of how New Zealand was built in the later years of the nineteenth century. Companion website

Roots of the family tree

His honour the Mayor!

Our hero enters the story

We introduce our hero

The lovers are parted!