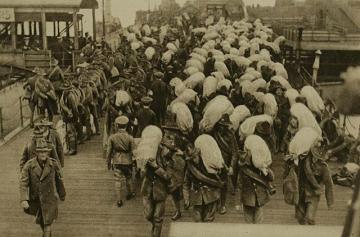 New Zealand troops unloading at a French port in 1918

The riot on April 2nd (Good Friday) came to be known as the Battle of the Wazzir (Cairo’s brothel quarter). The riot involved both New Zealanders and Australians, and was partly the result of high spirits getting out of hand, and partly a protest against the price of alcohol.

Sir Ian Hamilton, on the eve of the Gallipoli landing:

Before us lies an adventure unprecedented in modern war. … we are about to force a landing upon an open beach in face of positions which have been vaunted by our enemies as impregnable. … Remember, once you set upon the Gallipoli Peninsula, you must fight the thing through to a finish.

THURSDAY – 1st April 1915 – Battery training. We expect soon to be away from here and this afternoon sprayed our blankets and overcoats with disinfectant. This operation was much needed.

FRIDAY – 2/4/15 – Holiday to-day after kit inspection by the Major at 9 a.m. Big riot amongst troops in Cairo tonight. Hundreds of pounds worth of damage done. Shots exchanged between military police and the crowd with the result that several casualties occurred. All troops here are disgusted with the occurrence which we are afraid will give us a bad name.

MONDAY – 5/4/15 – Paraded in full marching order at 10.45 a.m. and proceeded to Australian Camp for inspection of all those men, horses and vehicles which are going on board the transport "Californian”.

TUESDAY – 6/4/15 – Battery training. All Officers were casualtied and the Battery was manoeuvred by non-coms. I took the place of the Battery Captain and had good experience. Maori Contingent departed this evening.

WEDNESDAY – 7/4/l5 – Section training with the non-coms in charge. This is great experience for the N.C.O's who will probably have to take the place of officers before this business is through. This afternoon we had a lecturette on landing horses on a beach or into lighters.

THURSDAY – 8/4/15 – Section training this morning with N.C.O'S in officer's places. Lecture from S.O. this afternoon re what to expect when we land at destination. General opinion seems to think that we will score about 1000 casualties in three days. This is cheerful.

FRIDAY – 9/4/15 – Section training again. This afternoon horses, guns and men were told off into echelons to facilitate landing.

SATURDAY – l0/4/15 – Preparation for moving off and parades of echelons. No leave this afternoon.

SUNDAY – 11/4/15 – No Church parade this morning, but instead we struck all tents, cleaned up Camp, and generally made preparation for leaving tonight. This afternoon the battery paraded in full marching order as it would for entraining. “Reveille’ tonight at 11.30 a.m. We leave camp for Cairo at l2.15 a.m. and expect to reach there at 2.l5 a.m.

WEDNESDAY – 14/4/15 – Gunners firing shells all day. All limbers and wagons are being filled with fused shells. Horses, harnessed in the stalls this morning as they will be when transhipped to the punts for landing. We expect to be landing somewhere on the Gallipoli Peninsula.

THURSDAY – 15/4/15 – Passing islands all day in the Grecian Archaepelago. Full marching order parade this morning. Small arms ammunition issued to each man this afternoon. Expect to reach Lemnos, our rendezvous, about midnight tonight. We take orders when we reach there as to when and where we land. Greek mountain "Athos” visible this afternoon.

FRIDAY – 16/4/15 – Arrived Lemnos about 10 a.m. and were stopped outside the entrance to the harbour by a torpedo boat. After some delay we were piloted through the breach in the torpedo net which is stretched across the entrance. This breach is closed at night. Inside the harbour are about 200 transports besides about 25 warships including the Queen Elizabeth, the latest dreadnought. We are to be here until it comes our turn to disembark when we will sail for the Dardenelles. The transports here contain N.Z., Aust., English and French troops. During the afternoon a message came from the English transport making for here to the effect that she was being chased by a torpedo boat. A warship has gone to investigate. We are lying alongside the “Agamemnon” a dreadnought which was in the Heligoland fight and which received a rough handling in the Dardanelles. She has her funnels badly knocked about and has had two or three plates renewed by the repair ship.

SATURDAY – 17/4/15 – Parade of A Echelon to-day to practice for landing. Another French battleship arrived to-day. English troopship which was chased by Torpedo boat arrived to-day and reported that she had to run from a German torpedo boat which fired three torpedoes, none of which took effect. The warship which went to her assistance found and beached the enemy. Several more transports have arrived from England during the day. It is reported that the troops on board the transport which was nearly torpedoed became panic stricken and 80 or 90 jumped overboard and were drowned.

SUNDAY – 18/4/15 – Ships routine. More transports arrived to-day. Went with party of N.C.O’s to a British transport to see a regular battery slinging horses and guns. This afternoon a hydroplane flew over us for about an hour. It came quite close at times, sometimes being only 200 or 300 feet high.

MONDAY – 19/4/15 – Disembarking A Echelon for practice. When first landing at the Dardanelles no horses will be taken ashore by any but the howitzer battery. This battery will supply horses to pull all guns into position and will then let the horses loose or shoot them. I am not in A Echelon as no Corporals are going ashore with the first party. Several more transports arrived to-day from England. A dummy warship which is used as a decoy has also put in an appearance. The operations at the Dardanelles will cost a great number of men.

WEDNESDAY – 21/4/15 – Very cold wind and rain this morning. It makes one think of home to be back in dirty weather again. When we get into the trenches and it comes weather like this we will feel pretty uncomfortable. This afternoon senior N.C.O'S were shown the plan of operations on the Gallipoli Peninsula. We (the Austn. And N.Z. Div.) have been allotted a pretty hard task but by the help of God we will carry it through.

THURSDAY – 22/4/15 – Ship's orderly Sergt. to-day. Nothing unusual occurred. Several more transports arrived to-day. There is some talk of our leaving at 11 o'clock tonight for the Gallipoli Peninsula. If that is so we shall (or at least some of the N.Z. troops shall) be fighting soon after daybreak tomorrow.

FRIDAY – 23/4/15 – We are still lying in the harbour at Lemnos, but expect to leave for the Dardanelles tomorrow. Ship's routine to-day.

SATURDAY – 24/4/15 – Left Lemnos this morning at 6.30 but when about three hours out a case of small-pox was discovered on board and we had to put back to Lemnos to the base hospital. Left again at 6.30 this evening and are now lying out at sea waiting for the time to proceed to the place of bombardment and landing.

SUNDAY – 25/4/15 – Awakened at 5 a.m. by the round of heavy firing. Dressed and went on deck and saw a sight I shall never forget. As the day broke it revealed about 20 battleships bombarding the Southern end of Gallipoli Pen. Our ship was within a few hundred yards of the shore and well in the front line of battleships. The heavy bombardment lasted for about 2 hours and then the 29th div. began landing under cover of battleship's fire. Saw some magnificent fighting as the Infantry fought their way up the beach. Proceeded up the coast to our own landing place when A. and N.Z. infantry had already landed and were getting it hot. Could not land artillery under such heavy fire. Expect to land tomorrow. Casualties must be great. The sooner we land the better we will like it

MONDAY – 26/4/15 – Still aboard ship. Have watched progress of battle all day to-day. Our infantry are gradually gaining ground. This morning some Austn. Artillery was landed and some hundred's of men succeeded in dragging a gun to the top of a hill where it has been in action all day, although under heavy shrapnel fire. Tonight it seems to be silenced. Just before dark masses of infantry could be seen concentrating under cover of banks and some on the crest of the hill, evidently for the purpose of an advance after dark. We are all anxious to get ashore and into the fight but cannot land till the Turks are pushed back a little. Warships covering advance of infantry all day. Casualties reported to be 2000 up tonight.

TUESDAY – 27/4/15 – Desultory firing all night. Battle continued to-day with unabated vigour. Two tugs each towing several boats full of dead passed us to-day, presumably to bury the bodies at sea. This afternoon several large shells fell into the water in close proximity to the troop ships and caused a general movement further out to sea. We are now about a mile further out and cannot watch progress on shore as closely as before. We all sincerely hope that the Turks are soon pushed back far enough to allow all the artillery to land then we will send them our little messages. Queen Elizabeth took up a position about a mile seaward of our ship, presumably to bombard the Narrows but fog came on and prevented this.

WEDNESDAY – 28/4/l5 – Things appear to be much quieter on shore to-day. This afternoon a Staff Officer came on board and took away with him our observation officer. This looks “healthy” as it shows we will soon be going ashore. Reports say that things are progressing favourably and the Turks are having a bad time of it. At this moment the H.M.S. Queen Elizabeth and several other warships are bombarding a hill on the Peninsula and as far as we can see from here the shrapnel seems to be bursting very well. Portion of A.A.M.C. left our ship for shore about 8 o' clock tonight.

THURSDAY – 29/4/15 – Things much quieter to-day. Still no word of our going ashore although Turks are now some distance back. The Turks must have lost thousands upon thousands of troops, as our wounded report that the slaughter has been terrible. The village of Maidos has been burning all day and the flames are leaping high in the night. The 29th Div. has advanced from Cape Helles nearly up to our position and expects to reach us tomorrow. Several villages can be seen on fire.

FRIDAY – 30/4/l5 – Our Battery still on the ship. Firing has almost ceased on shore and with the exception of a few shrapnel nothing seems to be doing. We hear that the Turks are being strongly reinforced from the north so expect things to liven up tomorrow or the next day. A lovely full moon is shining tonight in a beautiful clear sky. This and the absence of firing makes everything appear so peaceful that one can scarcely believe that only a short distance from where we are anchored men are lying in trenches by the thousand, in constant peril of their lives, waiting and watching for an opportunity to gain an advantage.