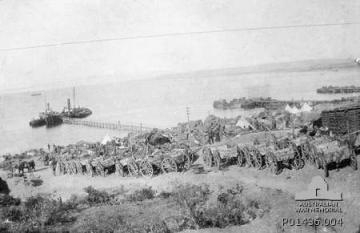 THURSDAY – 2/12/15 – Managed to get to-day off duty to attend to one or two little things. Posted to Alexandria a couple of cables with Xmas greetings together with a note to the cable company asking that the cables be held over till just a day or two before Xmas, and hope by this means to convince my people that I am all right at that time. I hope I am anyway. This afternoon I visited 4th Co. N.Z. Infantry at their rest gully but saw only two that I know. Battery shelled to-day.

FRIDAY – 3/12/15 – Brought blankets up to B.C. today as I have to sleep here tonight. Quiet day with misty rain. My No.4 gun reported out of action and ordered to be sent to base for general overhaul. Battery heavily shelled but no damage done. Informed by Major Standish that I have been promoted to 1st Lieut.

The evacuation, taken in stages, was completed by December 20.

In his military record, it's reported that Robert disembarked from Anzac on the 27th December and arrived in the camp in Egypt in mid-January. In February, he was transferred to 3rd Brigade Headquarters, and in April, shortly before embarking for France, was appointed Orderly Officer for the 3rd Brigade. In November, he became Adjutant. In July 1917, he was transferred to the N.Z.D.A.C. (New Zealand Divisional Ammunition Column), where he became Adjutant the following month.

Since his military record notes he was granted two weeks leave in England on the 29th of December, 1917, I assume this was the first leave he had. However, on his return to his unit he was almost immediately sent back to England to join the N.Z. Reserve Depot at Ewshott, where he again became Adjutant. In mid-April of 1918 he was admitted to the N.Z. Officers' Convalescent Home at Brighton with "Debility following tonsilitis". He only stayed a week, but four months later he was in the N.Z. hospital at Walton on Thames for a Chronic Cough, followed by a return to Brighton. I suspect the gas he'd suffered on the Western Front was behind these problems. Relinquishing his appointment at the Depot, after his discharge from the convalescent home, he was sent to HQ in London, but early in November he was declared "Permanently Unfit" and sent home to New Zealand on the Ulimaroa.