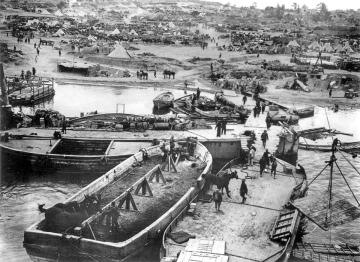 Anzac Cove, however, seems to have been regarded by the British command as a relative sideshow. The main campaign was in the south, at Helles, where allied units of British and French had landed. Advancing north, they had stalled at a line that came to be called the Eski Line. These units were reinforced on 1 May by an Indian Brigade and by the Lancashire Fusiliers on the 5th. Nevertheless, they ground to a halt on the slopes of the mountain Achi Baba, and the New Zealand Infantry Brigade, although exhausted by ten days of fighting at Anzac Cove, were ordered to Cape Helles to take the village of Krithia, on the lower slopes of Achi Baba.

On May 8, the New Zealand Infantry once again underwent severe losses. The battle came to be known as the “Daisy Patch”, for the open field of wildflowers which they had to cross, and where so many died. One hundred and seventy were killed; a further 665 were wounded (many of whom would later die of their wounds).