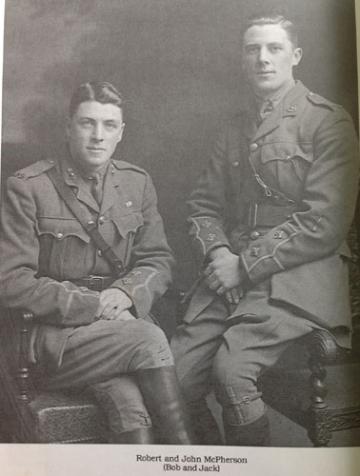 Robert & Jack in their uniforms

Robert McPherson was born in Dunedin in 1891.

During the First World War, Robert enlisted with the Main Body and became an artilleryman. After initial training in Egypt, he was sent with his regiment (the Third Battery, New Zealand Field Artillery) to Gallipoli. There he gained one of the first Military Crosses awarded to a New Zealand officer. Corporal when he landed at Gallipoli, his promotion there and at the later fronts in France and Belgium was rapid, and he eventually became adjutant of the Third Brigade, returning at the war’s end with the rank of Major.

He was active in the Returned Soldiers’ Association (as it was then called), and commanded the 11th Battery of the Field Artillery in Invercargill.

On his return he resumed work at Murray, Roberts & Co., stock and station agents. According to his son, he would have liked to try a different path, but felt obliged to return to them as they had continued to provide support throughout the war. He worked for them in Gore and Invercargill, rising to become branch manager.

Eventually, however, he felt able to move on. Moving to Christchurch when the Wheat Pool was formed in the 1920s, he became its manager, and saw the organization through its various incarnations (Wheat Marketing Agency Company; Wheat Purchase Board; Wheat Committee). For his work as New Zealand’s wheat and flour controller in the Second World War, he was later awarded the C.B.E. (Commander of the British Empire).

In his retirement, he became a keen potter, turning out many sturdy pots and bowls for the pleasure of his family and friends.

He died at age 83, survived by his wife, his three children, and ten grandchildren.

When he died, the damage done by the gas to which he was exposed was evident in all his organs (bar his liver, which, as a consequence of lifelong abstinence, was in wonderful shape!).

Robert’s younger brother John (“Jack”), aged 19 at enlistment, took part in the landing at Gallipoli on that fateful day of 25 April, won his commission in the fighting, but was wounded sufficiently to be barred from further active service. For his service in England, where he became adjutant at Codford Reserve Depot and was heavily involved in organizing sports activities, he was awarded an O.B.E. Returning to New Zealand at the end of the war with the rank of captain, he ended up commanding the 1st Battalion, Otago Regiment, in the Territorial Forces. At the start of the Second World War he was appointed officer commanding the 4th Battalion, National Military Reserve and was later tasked with the command of the 3rd Battalion, Otago Infantry Regiment. However, he died in 1942 before he could take up this position.

Their younger brother William (“Bill”) was only 17 when war broke out, but joined the New Zealand Artillery in his turn. He also returned safely from the war.