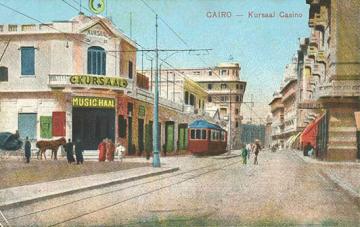 My grandfather’s words make plain the eager conviction with which so many ardent young men in New Zealand and Australia went off to war. This was long before the doubts that now assail us about the value of war or the acumen of those in authority. War was still seen as a “boys, own adventure”; the horrors of the trenches still in the future.

The depth of that conviction became startlingly evident to me as I read this journal. As I read my grandfather’s account of his time in Egypt, training for the war, champing at the bit, I anticipated the horrors of Gallipoli, and his growing shock and disillusion. Perhaps this did come in the bloody fields of France, but despite the rigours of Gallipoli (underplayed in this account, but evident for all that), he never, during this campaign at least, gave voice to any doubts or qualms.

The NZ Infantry Brigade was sent to Suez on 25 January in response to reports that the Turks were advancing on the Canal. The first action occurred on 2 February, when the Nelson Company fired on Turks using pontoons to try and cross the canal. The New Zealanders repelled them, with very little loss of life. The next night, Turkish artillery fired at the Wellington Infantry at Kubri, but there were no casualties, and no more attempts after that. At the end of February, the Kiwis returned to camp.

Mousky: a shopping district in Cairo

Heliopolis: one of the oldest cities of ancient Egypt, located in the northern suburbs of Cairo.

Virgin Tree and Well at Matarieh: present-day Al-Matariyyah is a district in the northern area of Greater Cairo, part of the ancient city of Heliopolis. The name is thought to come from the Latin word for mother (mater), a reference to the presence of the 'tree of the Virgin Mary' in this district.

obelisk: The only surviving remnant of old Heliopolis is the Temple of Re-Atum obelisk located in Al-Masalla of the Al-Matariyyah district. The red granite obelisk is some 20 metres high and weighs 120 tons.

FRIDAY – 1st January 1915. My birthday – What a change from last New Year’s day. Hope I am home for this time next year. Have thought a lot about home these last few days and hope this war will soon end. Jack and I spent afternoon in Cairo as we had a half holiday.

FRIDAY – 15th January 1915 – Battery training. All guns work very well together considering that this is the first time we have trained with all guns together.

SATURDAY – 16th January – Cleaning up camp and inspection of equipment this morning. Half holiday this afternoon. Visited Mousky with Jack and went to the Kursaal at night. Jack and I had our photos taken.

MONDAY -18th January – Battery training again. Expect to shoot one day this week with aeroplane to direct fire. Went out of camp tonight with all gunners and N.C.O’s to dig gun pits. We finished the four pits in three hours, all work being done entirely in the dark and no light whatever being allowed. No talking or unnecessary noise of any kind was permitted.

TUESDAY – 19th January – Marched out to position of gun pits constructed last night and after inspecting them filled them in again. The pits in daylight looked very well and would have afforded quite good enough protection until daylight. After this we held a mounted parade and co-operated in a scheme with infantry and mounted infantry.

WEDNESDAY – 20th January – Co-operated again with other arms. Had a very hot dusty day which tired the horses considerably. Men cheerfully put up with a piece of bread and cheese and a biscuit for lunch on these days, and I consider they would just as cheerfully suffer all kinds of further hardships if we were actually at the front.

THURSDAY – 21st January – Battery training again. On guard tonight. Shoot tomorrow with ten rounds per gun. This is not much for a day’s shoot, but we must reserve our ammunition for other than dummy targets. I hope I can manage to be relieved of guard in order to attend the shoot.

FRIDAY – 22nd January 1915 – Fortunate in being relieved of guard. Very satisfactory shoot, co-operating with infantry, although the expected aeroplane was conspicuous by its absence. It is rumoured that the Turks are getting closer to the Suez Canal, and we may have to go there next week. A change would do all the fellows good, especially if they saw the chance of a fight.

SATURDAY – 23rd January – Harness cleaning and general fatigue making ready for the usual Saturday inspection. Half holiday. Went to Heliopolis and Cairo with Jack endeavouring to buy films for his camera, but we were unsuccessful as all dealers in photographic supplies were sold out.

SUNDAY – 24th January – Church parade. Walked with Jack to Heliopolis this afternoon but had to be back for 4 o’clock stables so did not have long there. Wrote letters to-night.

MONDAY – 25th January – Battery training again to-day. This seems to me to have been the hottest day we have had since landing in Egypt. This evening the infantry got word to proceed to the Suez Canal tomorrow morning. There was great excitement in their lines. All town leave was stopped and wagons are rumbling backwards all the time, carting stores for the mobilization. It is rumoured that they will be fighting very soon. The men cheered and cheered again when they heard the news. Went to say good-bye to Jack but he is coming to wake me up before they move off tonight.

TUESDAY -26th January – Infantry left this morning. Battery training all day. Camp seems deserted with so many men away. Ordered to-day to hold ourselves in readiness to depart for Canal at two hours’ notice. Went to Heliopolis to get my watch which I had left to be cleaned, and thence to Cairo to see about photos of Jack and I. Cairo very quiet as nearly all units have had leave stopped.

WEDNESDAY – 27th January – Battery training. No. 2 Battery had a practice shoot to-day and we took up a position from which we could see the shooting. Excellent shoot. If we do as well we should be satisfied. All leave stopped from to-night for three nights on account of religious festivities in Cairo. If troops were in town on occasions like this it would probably cause trouble with the natives in their excited condition.

THURSDAY – 28th January 1915 – Shooting to-day. First series excellent. Second series very good. If we get a chance to do as well at the Turks we will give them a big fright. No word yet re going to the Canal.

FRIDAY – 29th January 1915 – Battery training. Reinforcements expected to arrive here tomorrow. No word yet of anything regarding the Canal.

SATURDAY – 30th January – Inspection of harness, gun park &c. Reinforcements arrived early this morning. Half holiday this afternoon. I visited Virgin Tree and Well at Matarieh. This is the spot where the Holy Family dwelt during sojourn in Egypt. Had a drink from well. Also visited the chapel alongside and saw the famous group of statuary representing the Holy Family. At night attended Kursaal.

SUNDAY – 31st January 1915 – Church parade in morning. Returned to Virgin Tree this afternoon and obtained some leaves and a twig from the Arab guardian by paying him “backseesh.” Visited also the famous [obelisk] of old Heliopolis. This monolith is cut from a single piece of granite and is something over 4000 years old.