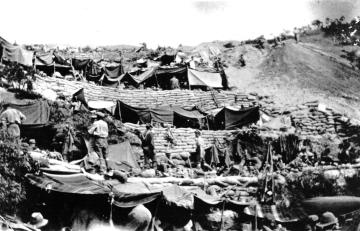 MONDAY – 1/11/15 – Things very slow. Went along to Susak Kuyu to determine where I would make my observation station in case at an attack in the near future on Hill 60. Decided on a spot and had a duplicate wire run out this afternoon so that communication would be harder to cut by shell fire.

TUESDAY – 2/11/15 – Last night about 10 o'clock a heavy rifle fire broke out on the right flank but did not spread to our part of the line. In case the firing should spread I turned out and remained by the telephone until a message came through to say that the A.L.H. had taken a trench on Lone Pine Ridge and the Turks were keeping up an incessant rifle fire expecting another attack. Observed our fire on trenches in front of Indian Brigade.

WEDNESDAY – 3/11/15 – Visited 6th Battery observing station where I met Capt. McQuarrie and then took him round the trenches on Hill 60. We had to establish our identity before being allowed through these trenches as a German Officer a few days previously had made a tour of inspection giving his name when challenged by sentries as Capt. Hart. The visit of this enemy officer was followed by a terrific bombardment the following day on the trenches he had inspected.

THURSDAY – 4/11/15 – Went up to barricade to have a look round for targets and to put up a few positions on the map. This afternoon I proceeded to Susak Kuyu to observe fire on the enemy trenches which we will bombard during the attack on Hill 60. Did not get back to my dugout till after dark.

FRIDAY – 5/11/15 – Did some more "map work" and observing at Barricade this morning. Observed fire of our battery on trenches on flat in front of Indian brigade. Started to learn Morse so that I will be able to work the "Buzzer" in case of a gas attack in which I lose my staff and consequently have to send my messages to the battery myself.

SATURDAY – 6/11/15 – Completed learning the morse alphabet and did a little practice on the Buzzer. Went to Susak Kuyu this afternoon to observe our fire but found communication broken on account of a cut wire. Went back with my telephone man to find the break and had to follow and test the wire under shell fire. Found the break and fixed it then went back and did the necessary observing.

SUNDAY – 7/11/15 – Relieved this morning by Lieut. Adams. Arrived at Battery about midday and spent the afternoon writing and sending new year cards. Tomorrow a new scheme for training giving the men 5 hrs. drill per day to keep them up to the mark will come into force. Lectures for officers will also be held on 3 nights per week.

MONDAY – 8/11/15 – Scheme of training started this morning. I had my Sergts. and Corps. for a quiet talk and told them how I wished things done and how I considered we could smarten up the men. Drew up a rough syllabus of training allowing for 45 mins. physical drill each morning before starting work on the gun. We have to take the risk of being shelled while doing exercises of course, but we try to avoid attracting Mr Turk's attention by drilling in small squads behind little sandhills.

TUESDAY – 9/11/15 – Physical drill started this morning and was rather good. Men seem to be settling down to the idea of training to keep them smart and fit. Message has come through to the effect that war office has reliable information that the Turks intend to use gas. Inspection made by sergts. to see that all men were provided with gas helmets or respirators.

WEDNESDAY – 10/11/15 – Laying fuze setting and gunnery. Went to B.C. Station this evening for lecture but assisted the O.C. with list of promotion for N.C.O's.

THURSDAY – 11/11/15 – Drill and routine work with, of course, our usual firing in the afternoon. Had an invitation to B.C. station for dinner tonight and spent rather a pleasant evening with the Major and Mr Daly. A good many bullets were flying about the flat as I crossed but we never seem to be hit while going to B.C. I suppose we will get it one of these days though.

FRIDAY – 12/11/15 – Gun drill and fired our 40 rounds as usual. Had to go to B..C. station tonight for lecture and had rather an interesting time with displacement angles etc.

SATURDAY – 13/11/15 – General Johnston and Col. Braithwaite visited battery this morning and found all correct. As I go forward observing tomorrow I had several little things to fix up to-day so as to leave everything square.

SUNDAY – 14/11/15 – Relieved Lt. Adams in Gurkha trenches to-day. Things up here just as slow as back with the battery. Went to Susak Kuyu this afternoon to observe H. & T. Targets to see that everything was in order for our bombardment tomorrow during the attack on Hill 60. Found our communication cut and had to come back with my telephone man to mend it. Found the break and mended it under shell fire but without either of us suffering any damage. This wire is in a bad place and is cut as soon as the enemy shell so I had “bridges” put in to minimise the chance of a break.

MONDAY – 15/11/15 – Five mines exploded on Hill 60 at 5 p.m. Turks trenches completely destroyed as also were their heavy barb wire entanglements. Artillery made good practice on fleeing enemy. But for some reason or other the infantry were ordered not to advance with the result that we are now but little farther ahead than before we mined the Hill. Enemy shelled our trenches pretty severely and when I returned to my dugout I found it had been wrecked by a Turkish high explosive.

TUESDAY – 16/11/15 – Quiet morning but enemy opened up heavy bombardment all along our lines this afternoon. I was in Sikhs front trenches observing at the time and stayed there in case they should want artillery support. I cannot understand that object of the bombardment as no attack came. Evening suitable for attack but none launched. Am going back to the Sikhs' trenches tonight about 9 o’clock as they say the enemy come out at night and work at a new trench in front so I want to fire on them.

WEDNESDAY – 17/11/15 – Fired 4 rounds last night into a party of enemy estimated at about 80 working in front of Sikhs trenches and must have done some damage. Went with Major Standish this morning to Headquarters of the Marquis of Tullibardine's Brigade on our left. We are registering on enemy trenches in front of General Tullibardine's left so that we can support him in case of emergency. I will have to go to Green Hill tomorrow to register this target.

THURSDAY – 18/11/15 – Went to Green Hill this afternoon with one of my staff but communication which had been arranged by 3rd Brigade headquarters was so imperfect that I was able to fire only one shell as I could not get corrections for the next shot through to the battery I had to stop shooting and come back to Indian Brigade. Will have to go out again tomorrow and arrange for better communication before I can shoot with the battery. From away on the left flank where I observe it will take about 3 miles of telephone wire to reach the battery.

FRIDAY – 19/11/15 – After a great deal of trouble and a couple of interviews with General Tullibardine I managed to arrange for the use of the necessary wires from 3.30 p.m. till 5 p.m. this afternoon. This means that all other business on about 3 miles of wire connecting many units would be hung up until I had finished my observing which I did satisfactorily and under the specified time.

SATURDAY – 20/11/15 – Had a quiet day in the forward trenches. This week has been full of work and episode and I would not mind if I could stay for another 7 days. However I suppose I will have to go back to the battery and put in a fortnight of stale artillery duels before I get back to what I hope will be another interesting week.

SUNDAY – 21/11/15 – Bitterly cold weather set in to-day. Relieved by Lt. Adams and returned to Battery where I spent the rest of the day in getting squared up.

MONDAY – 22/11/15 – Coldest day we have experienced since the landing. Drill this morning but I allowed my men off this afternoon so that they could improve the gun pits during the intervals of firing. A few shells were fired at us about midday but none have come over since.

WEDNESDAY – 24/11/15 – Still bitterly cold but as it does not rain we can manage to make ourselves fairly comfortable. I pity the poor infantry when the wet weather does come and catch them in their trenches. Order through tonight that there is to be no more artillery fire on this front for a period of 48 hours as we suspect that the enemy believe we are evacuating and we want to try and induce them to attack

THURSDAY – 25/11/15 – Nothing out of the ordinary happened to-day. Our M.R. are going into the trenches to Hills 60 and 100 as 54th Division are going to Mudros for a spell. Day seemed particularly quiet as there was no artillery firing on our aside and consequently nothing much from the big guns of the enemy. Night is very dark and stormy looking.

FRIDAY – 26/11/15 – Order re cessation of artillery fire extended for another 24 hours. Heavy rain accompanied by thunder and lightning commenced about 8 p.m. and later developed into one of the worst, probably the most terrific thunder storm I have ever seen. The Dere to the left of Battery usually dry, is carrying a tremendous body of water and the sea is so heavy that it comes nearly to the cookhouse.