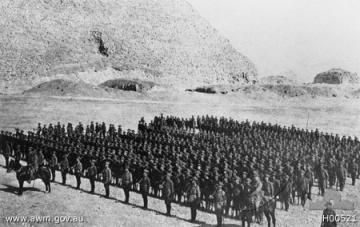 Australian troops in Egypt on parade

CRA: 'Commander Royal Artillery', the senior operational commander of the New Zealand artillery. Brigadier General GN Johnston held that appointment from 1915 to 1919, having arrived in Egypt in late 1914 as Lt Colonel in command of the NZ Field Brigade.

MONDAY – 1st February – Brigade orderly or orderly Corporal all this week and will therefore not be out training with the Battery. Brigade training starts this morning.

TUESDAY – 2nd February – Brigade training for the Battery. Rumours of a fight at the Canal. Hope we shall soon be required there to help in keeping back the Turks.

WEDNESDAY – 3rd February – Brigade training still. No mail so far this week. Rumours of heavy fighting including an artillery engagement on the Canal. All our men are anxious to be in the thick of it if there is any fighting and are jealous of the infantry who are getting all the fun.

THURSDAY – 4th February – Rumours re fighting on Canal confirmed by Egyptian papers. Turks attempted to throw a bridge across the Canal but were repulsed with considerable loss and the destruction of their bridging material. We have still no word of moving although we are daily expecting marching orders.

FRIDAY – 5th February – Brigade shoot to-day. All batteries did fairly good shooting and control of fire and manoeuvring &c. appeared good. Papers tonight announce Turkish loss at Canal as very heavy including 400 killed and 300 prisoners. Our losses reported slight. Butter was served out with the rations to-day and was received with cheers by the men. The C.R.A. who has come from the front to take command of the Australian and N.Z. Artillery gave a lecture tonight on some of the fighting in which he had been engaged. He was very interesting and I hope he soon gives another. It makes one proud to belong to the British artillery when one knows what British gunners have done.

SATURDAY – 6th February – Inspection of harness and all equipment as usual. No mail has arrived from N.Z. this week. Cannot leave Camp this afternoon or tonight on account of my being orderly corporal. Reinforcement horses arrived on our lines this afternoon and are causing some trouble. Have just been called out to put three extra men on picquet on this account.

SUNDAY – 7th February 1915 – Church parade in morning. My week of Orderly Corporal finishes tomorrow at Reveille and I am pleased that it is over.

TUESDAY – 9th February – Brigade training. All batteries left Camp by different routes, met at an appointed rendezvous, and carried out a scheme of manoeuvres. Went to Heliopolis tonight to have my watch fixed.

WEDNESDAY – 10th February – March discipline. All N.Z. troops and a great number of Australians concentrated near Cairo, then marched to a point between Zeitoun and Helmieh where the troops formed a bivouac. Arranged billeting accommodation &c, and then returned to Camp. This is training for officers and Q.M. Sergeants. On guard tonight.

FRIDAY – 12/2/15 – Brigade shoot to-day. Work carried out in conjunction with mounted infantry and infantry. Shooting excellent all round. Great number of English officers witnessed the work

SATURDAY – 13/2/15 – General camp cleaning as usual. Stayed in Camp during afternoon and wrote letters home. Went to Kursaal at night.

SUNDAY – 14/2/15 – Obtained a whole day pass and visited the Pyramids with two others, Sergt. Goldsmith and Br. Boult. We visited the Sphinx Temple and the old tombs cut in the rocks about 400 yds. from Great Pyramid. These tombs are situated alongside an Arab village, and many of them are occupied by people who are too poor to build houses. The amount of filth and poverty to be seen here is extraordinary.

MONDAY – 15/2/15 – Route march through outskirts of Cairo, Abassia, Zeitoun, and Matarieh. Weather is now becoming very hot and a long route march in the sun is very tiring.

TUESDAY – 16/2/15 – Battery training. We are still putting in some hard times on the desert, but it all makes us better fit to tackle the Germans.

WEDNESDAY – 17/2/15 – Battery training again. This training now is really more for senior N.C.O’s and Officers than for gunners and drivers. We usually arrive back from our morning training about 1 p.m. or later. We then water and feed and parade again for stables at 2.15 or 2.30 p.m. The gunners then put in the remainder of the afternoon at gun drill.

THURSDAY – 18/2/15 – Battery training as usual. We are beginning to think now that it will be longer than we expected before we get to the front. However we must just grin and bear it and remember that all the time we are becoming more and more fit to meet the Germans.

FRIDAY – 19/2/15 – Carried out a big field day to-day in conjunction with Engineers and mounted infantry. The work of the artillery brigade was very satisfactory. We paraded for moving off at 7.15 a.m. and did not reach Camp again until about 6 p.m. This meant that we had put in about 11 hours solid work on the desert.

SATURDAY – 20/2/15 – Usual cleaning up this morning. Visited Tombs of the Mamelukes and Tombs of the Kalifs this afternoon, and drove through “Old Cain” passing under the Roman Aqueduct and through the great iron gates in the walls of the ancient part of the city. Attended the Kursaal in the evening.

MONDAY – 22/2/15 – Battery training – Officers nearly all away so the non-coms had good training taking their places. I acted as Sergt., Section Officer, and battery leader in turn.

WEDNESDAY – 24/2/15 – Battery training this morning. Drivers, stables and harness, Gunners, gun-drill this afternoon. We were to have left Camp tonight at 6.30 to take up a position in the Desert and entrench ourselves. This order was cancelled on account of a big inspection tomorrow by Brig. General Cunliffe Owen. Tomorrow the actual fighting batteries will parade complete, and all spare men and horses will be handed over to the new D.A.C.

THURSDAY – 25/2/15 – Gen. mobilization of all artillery held this morning for inspection by General Cunliffe Owen. Battery paraded in full marching order, with all kits packed and stacked ready to go into depot. Everything points to an early departure and none of us expect to be here for longer than about 10 days.

FRIDAY – 26/2/15 – Brigade training. We paraded at 8.15 a.m. in full marching order to take part in a sham fight. The enemy did not put in an appearance until about 2 p.m. so we were waiting on the parade ground for about 6 hours before going into action. Tonight the infantry returned to Camp from the Canal. Saw Jack who seems to have grown during his 5 weeks at Kubri.

SATURDAY – 27/2/15 – General clean up in morning. Went to Cairo with Jack this afternoon to buy camera films. Stayed for the evening and went to the pictures.

SUNDAY – 28/2/15 – Church parade this morning. On guard tonight. Slept for most of the afternoon.